Elmo Iscariot sent me a note about the recent rediscovery of the original art for "The King in Yellow".

I don't know if you've heard but the crew of the Sci-Fi Channel's show Hollywood Treasure (a reality show about a movie memorabilia consignment house) visited a gentleman who inherited much of the science fiction and fantasy collection of Forrest J Ackerman.

While going through the items he was willing to sell, he offered what he claimed was the original poster-sized cover art for The King in Yellow, supposedly painted by Chambers himself. The appraiser was unimpressed, because he mostly moves items from mainstream properties and didn't think there would be much interest. He reluctantly took the art, and estimated it would bring $400-600. At the auction that ends the show, phone bidding finished at $7000.

The episode seems to either be called "Joe's Judgement Day" or "Spidey Cents" (the latter only on the SF Channel's website). It doesn't look like video is available legally yet.

The auction listing for the piece is still available at the Profiles in History website. Here's a look at the actual art: 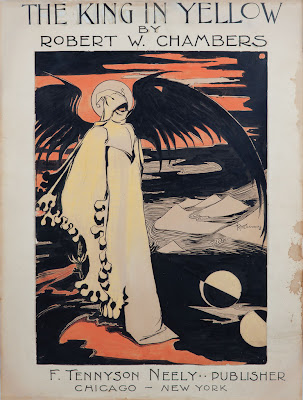 It's a beautiful piece that draws on the traditional iconography of the greek god Thanatos as a cloaked, winged figure carrying an inverted torch. What it doesn't have is the inverted torch with swirling flames, a reversed interpretation of the Rod of Asclepius, that I used as the inspiration for my alternative interpretation of the Yellow Sign . Sadly, it appears that I, like so many before me, didn't appreciate the true nature of the King.
Posted by Propnomicon at 3:00 AM

Labels: The King In Yellow

I don't get it, there is an inverted, flaming torch in his hand. Is it that the flames have to wrap around the torch to count?

It's a whole lot *cooler* when the flames wrap around the torch, since that creates the image of an inverted Rod of Asclepius. It's still possible Chambers intended that, and revised the artwork accordingly, but it argues against the idea it was incorporated from the start.

A brief Google search shows that Ackerman was a bit of a fan of the King in Yellow in particular.

I had no idea the inverted torch was an emblem of Thanatos. the only classical inverted torch I'd been aware of was the one carried by Cautopates, one of the attendants of Mithras in the Tauroctony. It didn';t make sense for Chambers to have intended that allusion, as the iconography of the Tauroctony is far from well understood. Thanatos is a much better fit.

Well there is also the addition of motion. The artwork definitely looks like he is walking and the flames are being blown back. So perhaps they wrap around the torch when he holds still.