Brandon Zimmerman returns to our pages with this Olmec Cthulhu idol carved from jadeite.  His rough, twisted style really captures the corrupted feel of Mythos artifacts.

Uncovered in the mid 19th century in the tropical lowlands of south-central Mexico, these strange idols, depicting the great god Cthulhu, are believed to be of Olmec origin. The Olmec were the first major civilization in Mexico and flourished from 1500 BCE to about 350 BCE. The idols are dated at approx. 400 BCE and are carved from a rare form of the mineral Jadeite.

To date scholars have not determined the cause of the extinction of the Olmec culture. Between 400 and 350 BCE, their population decreased at an alarming rate. According to some archaeologists, this drastic depopulation was probably the result of a cataclysmic environmental shift, manifested in the form of a massive earthquake or flood. 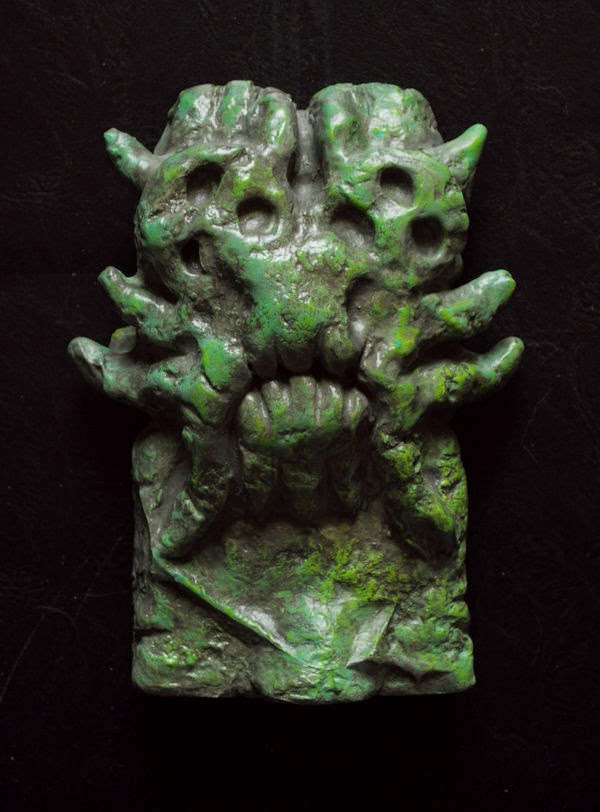 The piece is very well done, but I have to admit that I'm kind of disappointed by the crude appearance; what little Olmec art I've seen seems to be typified by a careful attention to detail and scrupulous realism. It's very possible, though, that I'm unfamiliar with other pieces that have a more stylized/abstract appearance, in which case I can only apologize to the artist for my unwarranted criticism.

The pieces of which you speak were made by abrasion. That is why they have that polished look. Use of a abrasive soaked cord was used to incise the grooves.

It's got a great feel to the piece. Consider that it may be a pre-human sculpture found and used by the Olmec.