Josua-Mozes brings us this bureaucratic prop tableau.  The faux passport is a great piece of work. 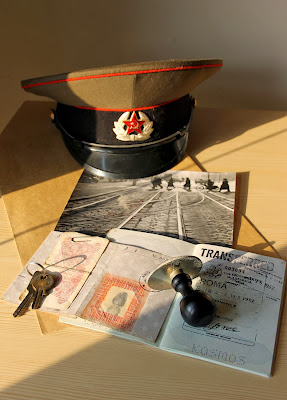 I generally don’t care much for modern era Call of Cthulhu games, because it is so easy to get into communication or do reference work on the web. But the idea of a Cold War Cthulhu with agents, Cthulhu minions, and you the person caught in the middle of the closing of the Brandenburg gate and the raising of the Berlin Wall just days away in the summer of 1961 just seems classic. Bad phones, no cell phones, no computer network and just 15 or so years after WWII with lots of post-war tensions in a country held by a dictatorial state. Why did the Soviets intervene to get you visas and passes over the objections of the DDR? Why is an obscure office in Washington fund this trip? Why is an Argentine emegre with a heavy German accent so interested? Why is a minor English lord, rare book dealer, and dabbler in the occult also interested? Questions are dangerous – answers are worse than dangerous and the truth behind it all …

You have ardent East Germans, Soviet Union and their East Bloc Warsaw Pact. On the other side is West Germany and the NATO coalition. In the middle is a group of researchers who had passes to go into areas now occupied by the Soviets to do archeological research and recover items hidden by the NAZIs in WWII. The Soviets want something, the Allies want something too and nobody is saying what it is: maybe hidden NAZI treasure, maybe documents of the fallen 3rd Reich, maybe much earlier important findings hidden in a bunker complex.

Now you may have Cthulhu minions working against you, some which might have Thule Society links, nobody knows, but you know your group is in danger and you don’t know what you might find and who is against you. A perfect setup for a series of games in starting in Washington, London, and Cold War Europe, all you need is to gin up a scenario and a good gamemaster – go to it!