Despite making dozens of prop bottles with wax seals I've never given much thought to them.  Press the cork to fit, dip the bottle top in molten wax, repeat until finished.

Now Elmo Iscariot has sent over some material that's making me rethink how I approach those seals.

I was just perusing a Wikimedia page with photos from the Arabia Steamboat Museum, in Kansas City, MO.  The Arabia sunk in 1896 and settled under the mud in the riverbed.  Over the next century the course of the river shifted, and eventually a team of archaeologists excavated the site.  Because the ship was carrying commercial goods to the frontier, the museum is like a fully stocked mid-19th centurygeneral store.

This is fascinating enough by itself, and there's probably plenty there of interest to propmakers, but one thing in particular made me think of you.  The bottles were all packed with their corked ends dipped in wax, so the contents are still intact, a century and a half later.


He included links to some photographs of bottles from the collection.  Like these pickles: 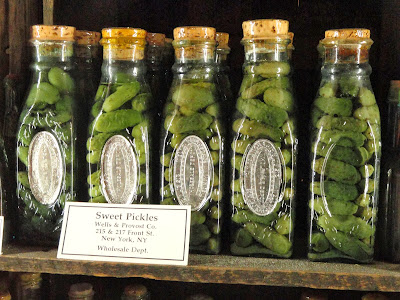 Just look at that. These things are over a hundred years old and they look like they were bottled yesterday. I'm sure being buried in an oxygen free environment helped, but the level of preservation is simply amazing.  Note the wax seal- it's just a single layer.

He also pointed out an assortment of preserved "pie fruit": 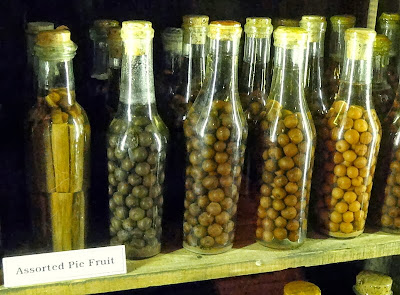 Again, they're amazingly preserved.  You can also see the variation in the length of the wax seals from workers dipping the bottle tops. 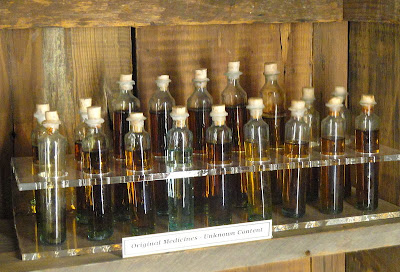 These are almost identical to some of the bottles I've used for prop specimens.  There are two insights to be taken away from this particular picture.  The first is, again, how rudimentary the wax seal on vintage bottles actually was.  Instead of the great knobby bulbs I've been using the wax is a single thin layer.  The thick buildup of wax present on many prop bottles may be appropriate for something crudely sealed at home, but professionally made items will have just enough wax to ensure an airtight seal.

The second item of note is the lack of paper labels.  They just don't hold up over time unless the bottle is in a protected environment free of moisture and light.  That makes me feel a bit better about the heavy weathering I've been using on my labels.

Another trove of buried steamship items is the Steamship Bertrand, which sank in 1865 with a cargo of mixed items, including corked bottle pickled items. An important part of the explanation is that they were not only covered over by mud which excluded oxygen but also cut off from damaging light as well. http://en.wikipedia.org/wiki/Bertrand_%28steamboat%29

for the bottle and container collector, a downloadable PDF of bottles from the Bertrand: http://archive.org/details/bertrandbottless00swit

A site for the bottles found on the Steamboat Arabia, sunk in 5 Sept 1856: http://glswrk-auction.com/102.htm Both the Arabia and the Bertrand are a literal time capsule showing what was available at the time they sank.

What about waxing the labels?

About the wax, could it not depend on where the bottles were sealed, and what you wanted to seal in?

Those are meant to be used, hopefully easily. A single layer of wax would keep them airtight, yet remain easy to break.

Now, if you want to preserve some kinf of abomination, or other specimen in a bottle, you may not need to re-open it, and would like to make sure it stays airtight, a heavier seal would be more difficult to break, and could bear some kind of official seal.

Wine bottles, planned for longer conservation, usually were sealed with heavier wax (those I have seen, mind you, and I'm no expert)
I know that sealing was is still available here in France, in red/mustard and sometimes green.

Probably another thing to consider for the history of the item.

Anyway, thanks for the link, those are beautiful things.

I love the museum, but people who grew up in the area tend to dig it. Museum workers would bring a large collection of the items to schools around here and recount the tale of vintage maps and good old fashioned research that went into the discovery.

If you want some more inspiration from our area, check out the National World War 1 Museum. Or just sign away a chunk of your day and peruse the online collections. The collection of photographs is a goldmine.
http://theworldwar.pastperfect-online.com/35156cgi/mweb.exe?request=random

The Nelson Atkins is another treasure trove if you want to see some ancient artifacts.
http://tinyurl.com/Nelsonatkinsancient

I believe you also featured some items from the Glore Psychiatric Museum (about an hour away) awhile back. If you want to flesh out your asylum, it's hard to beat Glore. The patient art combined with the barbarity of bygone practices makes for a very unique atmosphere.