The Mountains of Madness Project Update

I was able to get a lot of work on the Mountains of Madness project done over the weekend. I wrapped up the research into period radio sets and finalized the details of the gear carried by the Miskatonic expedition planes, so the blueprints are finished. You can click through on the JPG below for a higher resolution graphic, or download an 11 X 14 PDF over here. 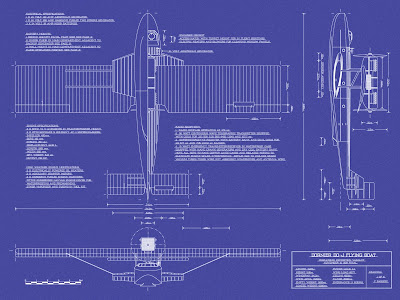 In the end I combined some details of the radio sets carried by the first Byrd Antarctic expedition of 1928-1930 with the ones used by Charles Lindbergh and his wife during their Pacific survey flight in 1932. Although the Lindbergh flight occurred later in the timeline it's equipment (the Pan-American 10C) was first available in 1929. The 50 watt telegraphic transmitter on board the Miskatonic Wals would have given them a communications range of over 2000 km, while the emergency transceiver would have been limited to around 650 km.

Another addition to the blueprint is the "fuel-warming and quick-starting devices worked out by Pabodie". This material was based on the modifications made to aircraft used by both arctic and antarctic expeditions throughout the twenties. It includes a rubberized canvas shroud for insulating the engine pod during warmup, electrical heating elements for the engine oil, and a backup system of kerosene heaters and an ether injector.

In addition to finishing up the blueprint I tackled a few other aspects of the project. That included work on the design for the publicity cards announcing the expedition's departure ceremony and some early work on the Kickstarter video. I should have something to show for that effort in a few days.

Update: For some reason the PDF was set to private, despite my default setting of making everything public. You should be able to download it without a problem now.
Posted by Propnomicon at 3:00 AM

Can't wait to see it all together!

So excited to hear about all this progress!