This Looks So Fake

I've mentioned before that when it comes to creating prop versions of government documents it's a good idea to make them look believable without actually trying to duplicate them. That's particularly important when you're trying to reproduce the look of currently circulating documents like government ID's. Now, thanks to the rather comical release of a Transportation Safety Administration manual we have some interesting examples of what official identification actually looks like. Here's a set of authentic Central Intelligence Agency credentials taken from the PDF of the manual: 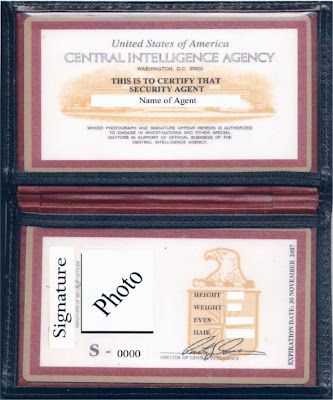 My first thought upon seeing it was "Sweet Jebus, that looks fake." It's just so...uninspired. After years of seeing cool CIA ID cards on television and in movies I expected something a lot cooler. Sadly, that plain vanilla approach applies to almost every single example of identification given in the manual. The only ones that have the appearance of a high-tech, anti-counterfeiting design are the technicolor monstrosities issued to Senators and Congressional Representatives. In those cases I can see the recipients demanding something befitting their lofty station, or at least their conception of how important they are. The grunts with the guns and actual law enforcement powers? They get ID that looks like it came from the copy center at Office Depot.

On the bright side, having examples of the real thing to work from makes it a lot easier to make prop versions. Not because it's easier to copy them, but for exactly the opposite reason. If you avoid using the design cues of actual identification you'll not only avoid any chance of forgery, but your prop ID will look a hundred times better. Seriously, wouldn't you assume CIA agents carried identification with lots of bright, scarlet red detailing? Who in their right mind would have thought burnt orange was their official color?
Posted by Propnomicon at 3:00 AM

It's the same for me with computer screens - check out this guys work on hi tech user interfaces seen in the movies:

Those designs look fantastic...on film. I think they would give me a headache after having to stare at them all day in the real world.

For a really low-cap firm.

I always thought it was really retarded that agencies like the CIA and FBI refused to let the public see what their ID and badges looked like. What's the point in even having a badge to flash if no one can recognize it? If the FBI ever came to my door, I wouldn't cooperate with them, because I would have no way to verify that they were really FBI.

When I was a kid my local police department came around to the grade schools and showed all the kids what a real police officer's uniform, badge and patches looked like. They even gave us a coloring paper of the patch design so we would get a good look at it and be able to tell is someone was impersonating a police officer. I think that is the much more rational approach.

The same problem exists today with U.S. currency. They make so many changes to the bills, and do such a poor job or publicizing it, how are we supposed to trust that a bill is good if we don't even recognize it? It undermines the public trust and the layman's ability to distinguish a forgery, which it the opposite of the intent.

I guess CIA agents don't need to flash their ID much in their line of work so they don't need some thing flashy.


But I was expecting something more exciting.

It's not the burnt orange that hurts, man, it's the FONTS. Oh, god.