After a long absence, I've slowly been getting back into traditional fantasy tabletop roleplaying.  And by "long", I mean it's been decades.  The last time I delved a dungeon Ronald Reagan was still president and 2nd Edition Dungeons & Dragons was just a rumor.

It should come as no surprise that I like to run a prop-heavy game.  Part of that includes having actual treasure to hand out.  I could wax poetic about using a multi-sensory approach to encourage immersiveness at the gaming table, but the truth is I love loot.  Gold!  Silver!  Jewels!  Sign me up.

The explosion in the number of companies offering fantasy coin sets demonstrates I'm not alone in that feeling.  Unfortunately, those coins have some problems.

The first is their astronomical price.  If you want a real hoard filled with piles of gleaming coins it's going to cost you hundreds of dollars.  That's just the nature of the beast.  Fantasy coins are a luxury product, and custom metal casting isn't cheap.

The second is aesthetic.  Most of the coins currently on the market have modern design sensibilities, with clean lines, neat layouts, and, worst of all, contemporary fonts and numbers.  They can be beautiful pieces of art, but they're essentially gaming tokens.

That's not what I'm looking for.  I want loot that could actually pass as something found inside a long-mouldering dungeon.   In a perfect world I win the lottery and could buy up actual hoards of ancient coins.  Sadly, that day has not arrived.  In the meantime, this is what I've been using.

For the stuff available from Amazon I've included affiliate links.  Click through and I get a commission to help fund my prop-buying at no cost to you. 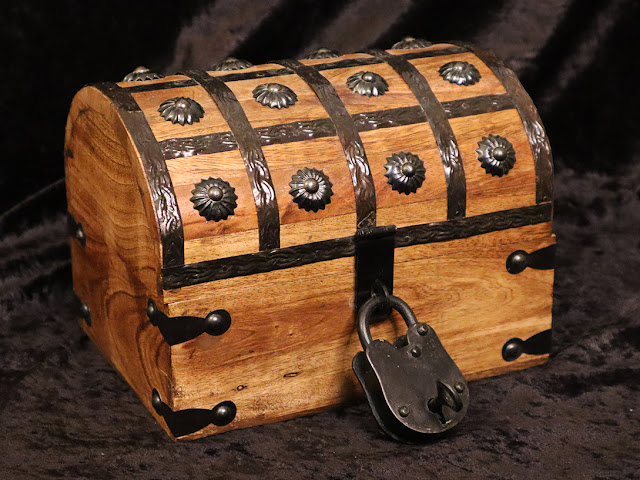 The treasure chest where I stash my loot.  I picked this up a couple of years ago on Amazon for a pirate-themed birthday party.  At the time I think I payed around $25 for it.  Unfortunately, the box doesn't seem to be available anymore, which is a damn shame.  It's 8" wide by 6" tall and 6" deep, made of stained rubberwood, and adorned with stamped steel pressings.  The chest is solidly made, and came with the padlock and two keys. 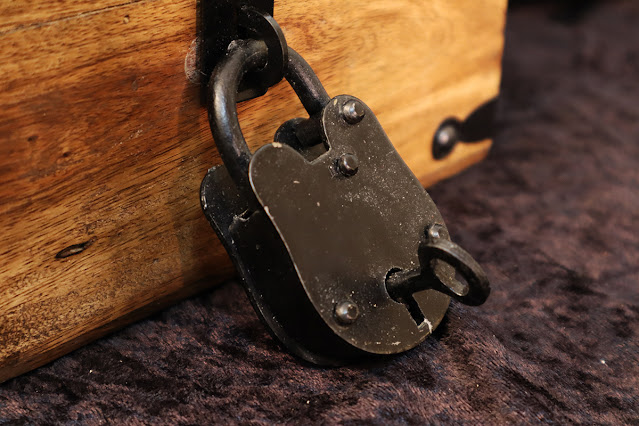 The lock looks the part and the mechanism works. It's cheap steel, so as soon as the paint rubs away it's going to start rusting.  Not necessarily a bad thing if you like that look.

Keys are awesome plot drivers.  For every key, there is a lock, and something valuable enough to need protection.  Give players a key and they won't quit poking around until they find the lock it fits.  That admittedly manipulative approach engages players even more when you're using physical props. 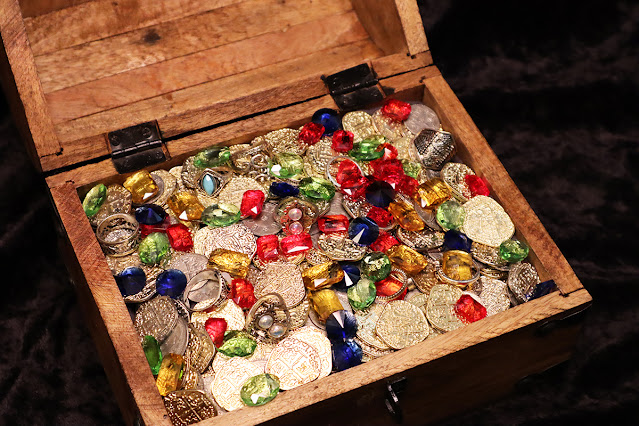 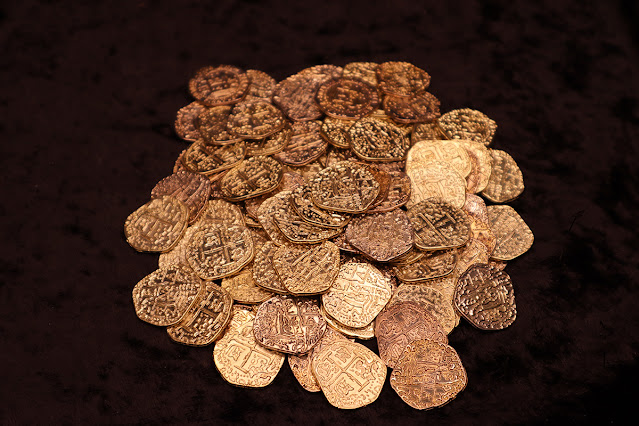 For gold coins I'm using these Spanish doubloon replicas from Beverly Oaks.  They're made from brass plated zinc, around 3/4" in diameter (the size of a quarter), and and have the rough, hand-struck look I like.  At $18.95 for 50 each coin costs around 38 cents.  That's about the best price you can find for metal coins.  If you don't mind plastic you can spend a whole lot less.  These "Ancient Pirate Coins" look decent, measure a hefty 1 1/2' in size, and are a steal at just 8 cents apiece.

I like metal coins for two reasons.  One is the sound.  There's nothing like the clink of metal coins running through your fingers, or the distinctive thump of a leather money pouch dropping onto a tabletop.  The second is weight.  You don't really appreciate just how much treasure weighs until you're carrying a pouch filled with 300 "gold" coins.  And that's fake gold made of zinc.  The real stuff would weigh over 2.5 times as much. 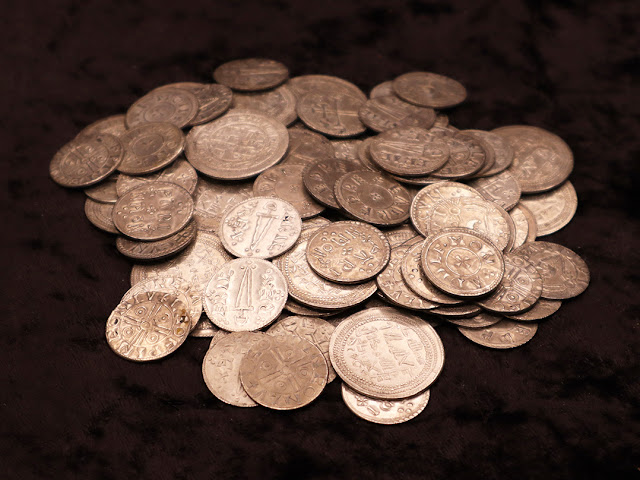 If I was starting from scratch I would pick up the mix of gold and silver doubloons from Beverly Oaks.  It's the exact same die they use for the gold coins above, but with a mix of pure and "aged" gold and silver coins.  The per coin cost is around 26 cents, significantly cheaper than the all gold set they sell.  Based on the reviews there's a reason for that- a preponderance of the tarnished coins, which I suspect are seconds. 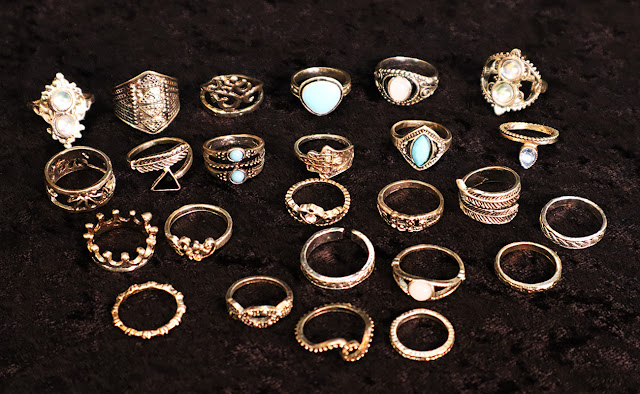 Ah, the simple joys of looting bodies.  I wanted rings for treasure stashes, both as magic items and sellable spoils.  I was pleasantly surprised to learn buying dozens of them at once is perfectly normal.  Amazon is filled with sets of "stackable" or "bohemian" rings, because wearing multiple bands on every finger is actually a thing.

I picked up a "Vintage Knuckle Ring Set" and this is less than half of what was included.  Fine jewelry?  Not at this price.  The rings are pot metal and faux stones.  That said, you get close to fifty of them and their designs, particularly things like the curling tentacle, lend themselves to repurposing as magical rings. 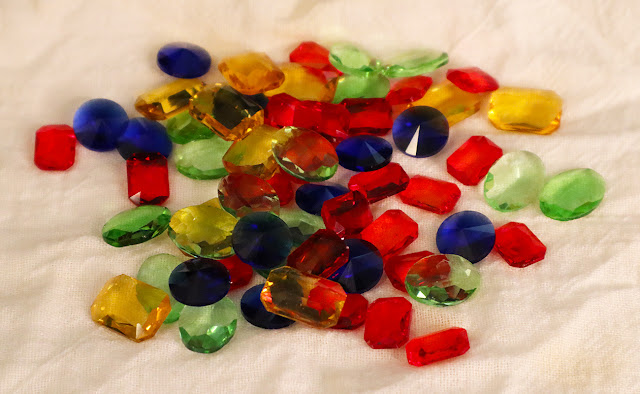 Finally, we come to the jewels.  Acrylic gems are dirt cheap thanks to their popularity as table decorations for wedding receptions.  Unfortunately, they don't clink. That seems like a small thing, but it's the reason I wanted cut glass or crystal gems.  Little did I know how aggravating that desire would become.

Cut glass gems are almost impossible to find.  A few Chinese companies have them, but you have to order pallet sized loads.  Nearly all the worlds production of three dimensional cut or cast glass stones ends up as decorative rhinestones.  The problem there is the reflective metal layer added by manufacturers so the stones will sparkle.

I can hear you asking the obvious question.  Why not just remove the backing?

Exactly my thinking, friends.  That's why I ordered these Glass Diamante Faceted Rhinestones from Amazon.  I was overjoyed when they arrived.  They look absolutely perfect, and all I had to do was strip off the metal.  Easy, right?  I Googled "removing metal backing from rhinestones" and had plenty of helpful answers.

Except none of them worked.

It turns out all of those techniques only work on rhinestones with a thin layer of metal foil glued to the back of the stone.   My stones had a layer of vacuum deposited aluminum.  The stones were put into a vacuum chamber, given an electric charge, and then a cloud of vaporized aluminum was released, electrostatically attaching itself to the glass. It's the same technique used to produce most mirrors.

The only way to get rid of the backing would be to dissolve the aluminum.

Before I tell you how to do that I want to emphasize something:

IF YOU DO THIS YOU WILL KILL EVERYONE IN YOUR HOME.  THE FUMES ARE TOXIC AND CORROSIVE.

Make sure the area is well ventilated and away from people and pets. Put the rhinestones in a non-reactive plastic container with a lid.  I used a recycled cold-cut tub.

Using a measuring cup, make a solution of 50% warm water and 50% household bleach by volume.  Make sure there's enough to totally cover the stones.  Pour the solution into the container and loosely place the lid on top.  Do not seal the container.

Stay away for 24 hours.  Once that time has elapsed, check to see if the aluminum has dissolved.  If there's still metal clinging to the glass carefully pour the liquid out into a sink and use copious amounts of water to wash it away.  Add another batch of the 50/50 water/bleach solution to the container, stir with a non-reactive or disposable stick, put the lid on loosely, and leave it alone for another 24 hours.

Repeat until the metal is gone.  Dump out the final batch of solution into the sink, wash it way with lots of warm water, and then thoroughly rinse the container and gems with warm water.

D&D props are a blast to make and use. Last time I played a cleric (I usually DM), I made a holy symbol of St. Cuthbert that I flashed like a badge.

Foolsgold or Zirkonia are also nice props for treasure
https://www.lederkram.de/category/298

Very cool, I fight the urge to make stuff like this very thing, so thanks for the links too.

You can get replica (or sometimes original) Chinese "cash" coins for dirt cheap from a lot of sources. Be warned that the coins sold as lucky/i-ching/feng-sui coins on Amazon, as they're uniform, cheaply made, and I've found some of them to be quite brittle.

I've had better luck finding "original" cash coins in lots on etsy. I have 0% evidence for provenance, but that really didn't matter much to me: I got a lot of them, they looked old, and (at least the ones I got) were more sturdy.

I was looking for some tips on painting a “thing” that will go in a jar and ... found your awesome blog!! I know I got tips on aging paper from you years ago, but then lost the link in a tragic computer accident!! I’m so glad you’re still doing what you’re doing!! I scrolled through the recent posts, and I’ll have to share some of my creations, too. It’s wonderful to find other people who don’t think it’s weird to collect fantasy coins, treasure, and other beautiful nonsense. I got a couple of sets to use whenever we play board games that use coins, and everyone loves them! You’re right about the gems - acrylic is the best we can (affordable) usually do. Somehow, I managed to find a supplier (who may or may not be in Asia - ha!) of beautiful glass gems for a fairly reasonable price. I use them for lots of different projects, but every once in a while I just pile them up and let them run through my fingers as I sit on an imaginary gold hoard under an imaginary dragon .... I love your treasure box - I have one on my to do list, and I actually have a handful of those doubloons to go in it! I’m pretty sure that same padlock holds my Necronomicon closed. :)

Oh my. It wouldn't have crossed my mind that you could actually buy faux nuggets like that. Thanks!

Give in to your urges. Heh.

I saw some of those on Amazon. Is there any way to tell which are the thin stampings and which have a little more heft?

The tactile feel of coins and gems are a huge part of the attraction.